Lesson number one when traveling in a foreign country, KEEP YOUR PASSPORT ON YOU AT ALL TIMES. A certain member of our trip did not bring his passport (It was not me) and when we were detained by the border police here in Vietnam, one individual was taken to police headquarters and questioned for 2 hours. Our guide was able to get his release but the tour guide’s company must now pay a fine for leading a tour with one member not carrying a passport.  KEEP YOUR PASSPORT ON YOU AT ALL TIMES! 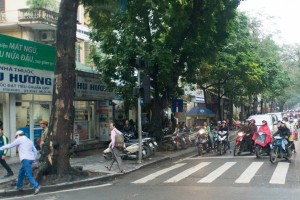 The days are very exhausting, with a long bus ride to Chu Lai this morning. It seems every road we are on is under construction, add to that the fact that there is no rhyme or reason to the driving lanes, passing on any side. Now I know who invented the game of chicken. I have some video that will amaze you. 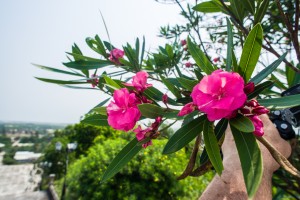 Some of the flowers we see here.

I mentioned before  there are some great looking flowers. Here is one of them. There are not flowers everywhere, but in enough places so to add color to the scene. Along with visiting the island off Rosemary Point, taking a ferry across the channel, we met some really nice people.

We visited Chu Lai Air Base, it  was a military airport in Chu Lai, Vietnam, operated by the United States Marine Corps between 1965 and 1970. Abandoned after the end of the Vietnam War, it was reopened as Chu Lai International Airport in 2005. At first, only a short airfield for tactical support was installed. The runway was an aluminum surface of interlocking lightweight metal alloy planking, a catapult and a carrier deck-type arresting gear. It also included a tactical airfield fuel dispensing system., Camp Shields, the Seabee base was built on the beach, nothing remains.

Taking a ferry across the channel to visit a small island.

We took ferry to the island off Rosemary Point.  Lots of fishing going on here as evident by the fishing boats in the harbor. The ride on this vessel was unique, but what was more unique was when the border police came to visit our bus as we were boarding, we all had our passports and were scrutinized by this young lieutenant.  Only one person did not have his passport and he was escorted to the police station, (again reminding-it was not me). Two hours later he was released and we sped off quickly. Quite an adventure today… 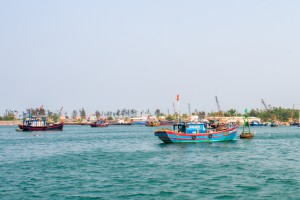 Most around here earn their living by fishing.