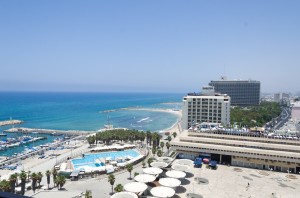 After a long flight from Pittsburgh and Newark, I arrived in Tel Aviv on what has been described at the most humid hot day so far this year. We went thru customs easily and added another stamp to my passport.  A cab ride to the hotel I am staying in was interesting, the cabbie was like a chatterbox. Of course he was speaking in Hebrew so I understood nothing. Thanks for one of the participants on this trip, David does speak the native tongue so i had some translated. The ride from Ben Gurion International Airport was along a modern 2-3 lane road, and of course with a talkative driver the ride went quickly. The ride was around $30 (US).

I was surprised to find Tel Aviv a city of many different styles and economic cultures. Tel Aviv, officially Tel Aviv-Yafo is the second most populous city in Israel. It has a population of around 4 million. The area I am staying in is right on the waterfront.  There is an area of hotels right along the waterfront. Tel Aviv is famous for its wide variety of world-class restaurants, offering traditional Israeli dishes as well as international fare. My first meal was at a little cafe just a short walk from the fabousle Herods of Tel Aviv. According to the promotional material, “Tel Aviv the way it used to be.” That is absolutely https://www.carrienet.com/cheap-valium/ right, the way it used to be in the 1940s. The place is interesting, they tele is was at one time a Sheraton, now I call it a dump. possibly thats too strong, it is comfortable. The room is typical of a hotel room, I have a nice balcony overlooking the beach. 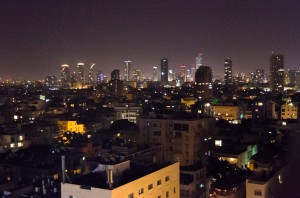 Back to the food, it was nice to just sit on the sidewalk area and watch people. Menus are in both Hebrew, Arabic and english and most of the waitstaff speak english. I enjoyed a chicken sandwich on a type of ciabatta bread with chicken, a nice dressing and some sliced veggies of questionable origin. I enjoyed walking thru some of the area and later had a nice late night dinner and some Israel beer at a cafe overlooking the beach. I got to spend some with with Danny Brode, a former Duquesne student who now lives in Tel Aviv. Some great conversation about the challenges living here, and the adventure. After 2 hours I walked back to the hotel along the beach, bustling with soccer fans watching the games on big screens set up along the beach area bars. It was a long day and the first of many.  Today the first group from Pittsburgh arrives this afternoon, the adventures begins.