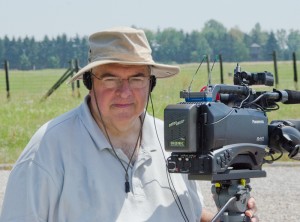 Unpacking the bags is not only a physical exercise, but also a mental one. I have re-coiled all the cords, wiped all the equipment with a soft slightly damp cloth, including the carbon fiber tripod legs, you would not believe how dusty they were. The USA to European power converters are all again together. I don’t take a big converter because most of the equipment manufactured after 1980’s will adapt to the 110-220 voltages without a big heavy converter. Check your equipment labels before plugging in. This of course is not true if you are using a device that generates heat, like a hair dryer or incandescent video light. Most hotels now have hair dryers in the bathrooms for those of you who need the hair done.

Though most of the time I have focused on the bad things that can and do happen, I also have some great success moments. So in this post I will touch on both. 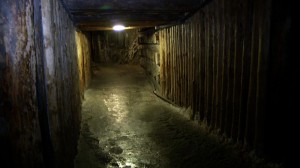 The low light in the salt mines near Krakow Poland is a video nightmare. The Wieliczka Salt Mine. The mine, built in the 13th century, produced table salt continuously until 2007, as one of the world’s oldest salt mines still in operation. The mine’s attractions include dozens of statues and an entire chapel that has been carved out of the rock salt by the miners. A wooden staircase with 378 steps provides access to the 210 ft. level of the mine. I think there are another 900 to the very booths, I gave up counting. 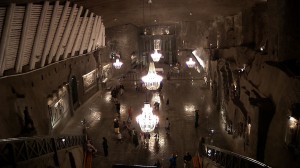 Massive room in salt mine

IT IS DARK! Yes it is dark, they have some illumination but very low light, and 50 cycle too. The Panasonic HPX 370 performed very nicely in the low light. I do have a LitePanel LED light for filling in faces but it is not enough to light a huge room. If I were doing this for a promotional video for the mine I would have used lighting to make it look even better. I had 6db gain on the video, very little noise. I also had to boost to 12db in some locations. You can see the video noise 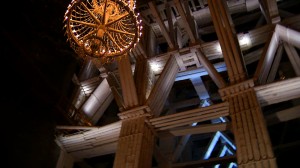 level in one of these shots. But I am happy with the cameras performance and the ability of the operator to haul this thing around the 2 mile walk. There is an elevator that takes you to the surface, but walking down so many steps can really exercise your thigh and leg muscles. 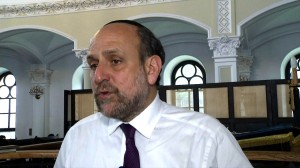 The on-camera light and the Lectrosonics SRA Dual-Channel Slot Mount ENG Receiver are designed to install in the wireless receiver slots found on professional video cameras are all powered off the Anton Bauer DIONIC-90 Digital Lithium Ion Battery. I had a few times when the battery level was down to under 1 hour left on the indicator, but I never had to replace the battery during  day of shooting. I tend to shoot with the eye-piesce and not use the LCD screen. Also I will use the zoom on manual. Since I lean toward setting the shot then recording it saves battery for me, I keep away from zooming unless i need something dramatic.

Some of the problems that I had were mostly beyond my control. I had great success with my Lectrosonics LMa Beltpack Transmitter using block 25. I always use the frequency scan on the receiver to locate free local frequencies. Before I leave for a location I use the frequency searches from the FCC and also other sources to make sure I wont be interfering with local police, military or emergency channels. So far I have had great success in securing interference-free audio. My subject wore the microphone and provided me with great audio. 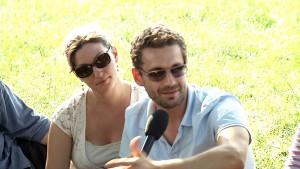 There were a few reflection sessions and I opted for having each pass the wireless hand microphone, instructing them to just hold it, don’t pretend you are a rock star. The HM-25 from Lectrosonics is a digital hybrid plug-on UHF wireless transmitter. It enables you to transmit the signal of a microphone or a line-level source wirelessly. I use a Sennheiser MD-42 and it works great for reporter stan-ups and also for these situations. The “reflection” sessions will provide audio from the missing interview sessions though I would have preferred on-on-one interviews.

As I catch up on sleep and remember more I will add to these posts and hopefully help you if you do this kind of work. Nothing like getting more stamps in the passport.