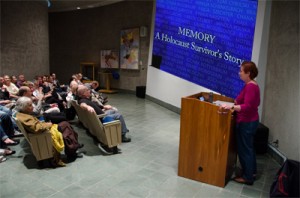 The presentation of the documentary “Memory: A Holocaust Survivor’s Story” was well received. There was only space for 50 invited guests, 60 showed up so we brought in chairs. Howard Chandler, the survivor who describes his life as a prisoner during the Nazi occupation of Poland in the film, spoke to the crowd and thanked them for taking time to view the film. Hedy Chandler, Howard’s Daughter was the spokesperson for the event held at the Holocaust Center in Toronto. Many of those in attendance were related to the Chandler family. It was a trip that was worth every minute. I was pleased to honor Howard and will be forever grateful for him allowing me to tell his story.