OK So I Have Been There

True, I have been to Israel and to Poland. I have been blessed to have the opportunity of traveling to some places I would have never thought I would be. Bosnia and Herzegovina, Prague, the western deserts of Peru, Rome, Alaska, Vietnam. Ok so they were not all fun times, but they all have had a way of changing the way I see things. 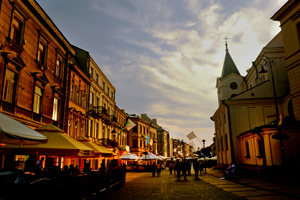 Take Poland, half of my family comes from Poland, the other half from what was once Austria/Czechoslovakia. I was overwhelmed with the modernism of Warsaw, and loved the preservation of Krakow. The city life was fun, the open-air Chopin concert in ?azienki Park, an almost 300 acre park. Along with many gardens it contains some early structures built for King Stanis?aw August. The Palace on the Water also called the ?azienki Palace and the Palace on the Island was built in the 17th century. Most of the buildings in the park suffered severe fire damage during and after the 1944 Warsaw Uprising, amid fighting between German and Polish forces. Reconstruction of the park and palaces was completed within a few years after World War II.

Israel was a fantastic experience for me, the food, the early preserved Christian sites, the heat.  The trip was part of a pilgrimage to discover the faith structures of the Catholic and Jewish faiths. Accompanied by Pittsburgh Bishop David Zubik and Rabbi Aaron Bisno, we visited many sites in both Rome and Israel. Probably the most emotional for me was the church of the holy sepulcher, known as the church of the Resurrection to Eastern Orthodox Christians, is a church in the old city of Jerusalem that is the holiest Christian Site in the world. It stands on a site that encompasses Golgotha, or Calvary, where Jesus was crucified, and the tomb where he was buried. The pilgrims spent a good part of the day on a walking tour of the historic city that included a visit to the western wall at the foot of the western Side of the temple mount. It is a remnant of the ancient wall that surrounded the Jewish temple and is one of the most sacred sites in Judaism.